Thanks to https://www.thejamunit.com/ for showing us what the “Tui” hot Strat pickups can do.

I’ve wound a lot of Strat pickups since I started in 1995. I started off re-winding cheap pickups and then moved on to repairing old dead Fender pickups. Every experiment was written down in a notebook with tone comments. Back when I started there wasn’t much information available so there was a lot of reverse engineering and a lot of trying things out. That learning time was invaluable to developing instinct for how to change the sound of a pickup. I’ve still got the note book and I’m still adding to it.

In, I think, 2014 a customer of mine approached me wanting a set of Strat pickups. He’s a great blues player and had recently moved from using a Les Paul to a Strat. He described the sound he was after and it seemed to me it was the same as I’d been after myself so I put some time in to designing a pickup set for him.

The “Tui”- hot Strat pickups needed to be most definitely a Strat sound – I hear plenty of Strat replacement pickups that are fine but just not Strat-ish. Secondly I wanted a bit more power, just a bit, enough to make a good old valve amp clip a bit easier than a “vintage” pickup would. And there needed to be dynamics – tickle it and it’s clean, dig in and it grits up. As I was making the original version of this set for a player used to humbuckers I wanted to reduce the ”ping” of the attack. I’ve added steel base plated as standard to this set. This changes the shape of the magnetic field, broadening the harmonic window. They add a wee bit of power, a wee bit of bass and reduce that pesky ping.

The neck pickup needed to have “that” Strat sound with fullness and clarity. It’s the ‘go to’ sound for most Strat players. The middle pickup needed to have some ‘quack’ to it with its own distinctive personality. The bridge pickup shouldn’t be too thin, it needs to have plenty of highs but not too much of that ‘ping’ or it’s almost useless. Then there are the other sounds – positions 2 and 4, mistakenly referred to as ‘out of phase’. They are really just 2 pickups in parallel. It’s hard to predict what those sounds will be, there was a lot of experimenting.

So I consulted my old note book and wound a lot of pickups and fitted them in a few test Strats. I’ve been lucky enough to have some great players as repair customers and so I was able to get quite a few opinions.

Eventually I was happy and I fitted a set for my ex Les Paul customer and he loved them straight away. A few months later he contacted me to say he was still loving them. I love it when players do that.

I’ve fitted resulting sets into a lot of instruments and it turns out that not only blues players like them, they seem to work for everyone. I shouldn’t be surprised, the Stratocaster is such a versatile guitar, of course they do. 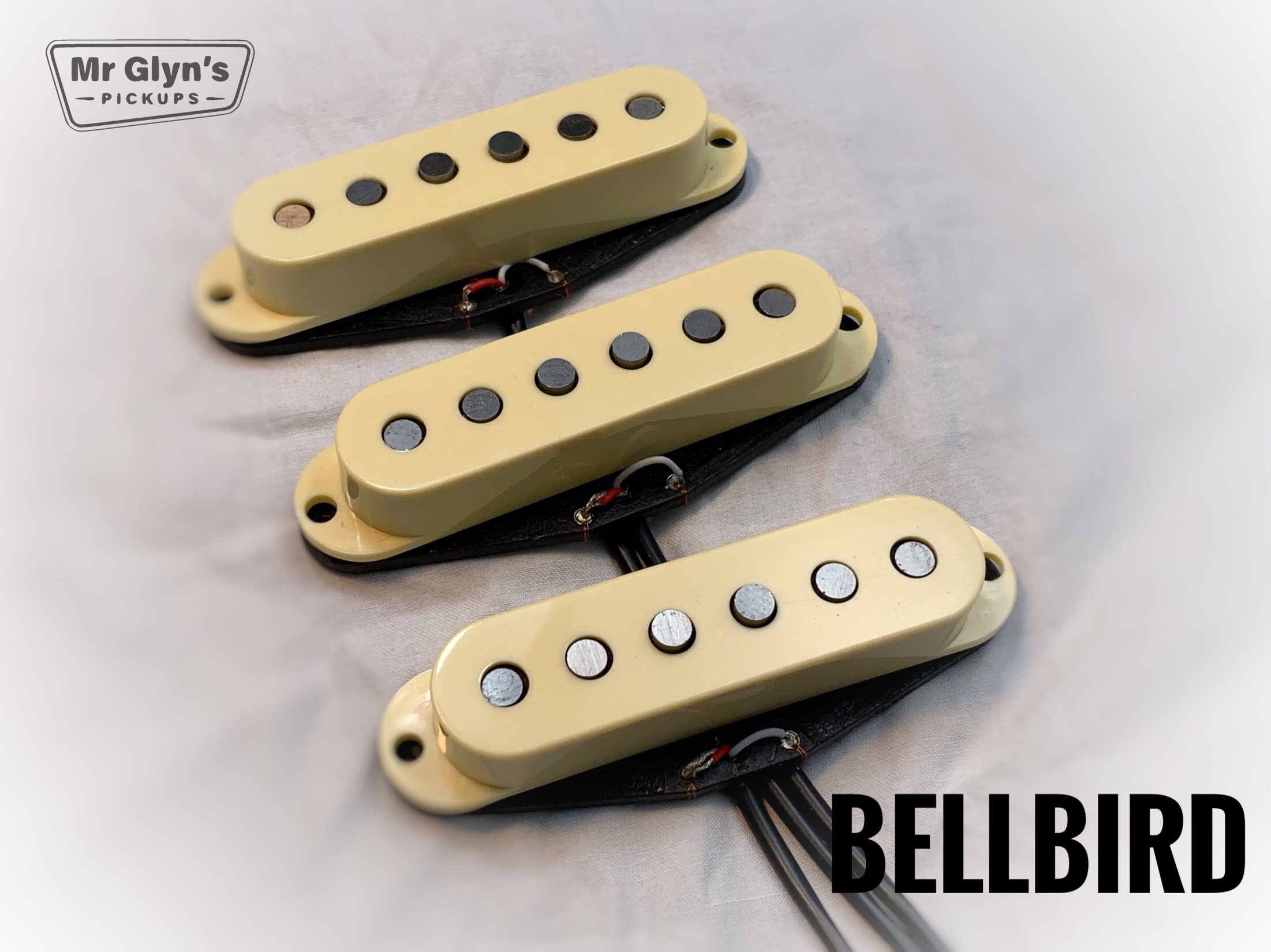 A set of MrGlyn’s Bellbird Strat Pickups getting some national radio play in the hands of Jason Herbert.

The Stratocaster has been around since 1954 and the legend continues. Reading the internet (!?) tells me there have been good and bad years or decades, guitars to avoid and ones worth hundreds of thousands of dollars. I’ve been repairing guitars since 1995 so I’ve played a lot of old Strats and analysed a lot of old pickups. Vintage pickups aren’t all great but the good ones are fantastic.

I’ve based my Bellbird Strat Pickups set on the best of the old pickups I’ve had the pleasure of playing through . So I use AWG42 heavy formvar insulated wire – there’s something about the thickness of that insulation that just works with an old Strat pickup.

I’ve aimed for that old quacking chime that makes Strats wonderfully percussive but with a singing quality that’s so musical. Warm and clear with beautiful almost reverb-like clean tones – that’s what I want out of an old Strat. The neck needs to be fat, round and clear, the middle pickup needs to quack and the bridge a cut through twang without thinness. The all important ‘in between’ sounds in positions 2 and 4 must be balanced and characterful. Nothing says Strat more than these sounds.

The Bellbird set has been designed mainly for clean tones but they’re certainly not afraid to perform with a bit of gain. As part of a HSS set they’re great with one of my ‘Integrity’ humbuckers in the bridge position.